Meet the Producer of The Silver Gaucho

Here is another of the characters from The Silver Gaucho. You don’t have to like him! 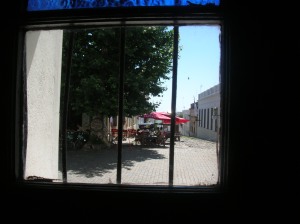 On a hot September day in 2001 I am meeting with Eduard Millan. The arrangement is for Saturday 8th. I am told he only sees people like me on Saturdays.

Meanwhile, the entire continent of South America is awash with El Gaucho de la Plata. Luis’ face is everywhere. The soap has been airing on TV twice daily for three years and its popularity is unparalleled. Luis Mabon has become an international celebrity and the telenovela, a network tsunami.

The producer is on a roll.

Even before we come face to face, I know I will dislike him. Eduard Millan is elusive, slippery. It takes nine phone calls before we speak, and only then because Luis intervenes on my behalf.

Eduard will not meet me in Buenos Aires, which would have been relatively easy, but insists that I make a ludicrous pilgrimage north across the watery border into Uruguay.

When I arrive, hot and dishevelled, he hands me a business card which reads:

He also hands me a glass of champagne and grants me an audience of fifty-five minutes. Exactly.

Eduard lies back on his day bed, takes a sip from a flute of Mumm and looks out across the glassy water.

Here, on the balcony of his rented villa in the old port of Colonia Del Sacramento, he says he is released from his web of entanglements.

Eduard shifts focus and lifts his glass into the sunlight. He contemplates the colour of the champagne. Buttercups. He says this particular champagne makes him think of buttercups – those same wild flowers that grew near his home in Connecticut. He tells me that he often picked them for his mother when he was small. And she would select one, hold it under his baby chin and declare that her Edward did, indeed, like butter.

But his mother and the Buttercups are long gone. And the ‘w’ in his name has been replaced with a ‘u’.

I cannot imagine Eduard Millan as a child, not in my furthest headspace. But I am surprised by his recounted memory. Is the trinity of mothers, little chins and buttercups universal?

The producer appears mesmerised by the bubbles in his glass. Either that or he’s stoned. He takes a second sip and lets the flavours of pears and honey roll around the inside of his mouth. He says he enjoys the anticipation of the dry finish: the sharp back-bite, particular to Carte Classique. He says it leaves him pleasured, wanting more.

I shudder and wonder if I have something different in my glass. And then I recall that I have tasted this champagne before. The label is familiar. I take a closer look. Luis poured me a glass of Mumm, too. It was in Buenos Aires, just after I returned. We were cruising the city in a black limousine.

When Eduard Millan is working, the need for sensory gratification gives way to the need to succeed. Freedom is exchanged for control, indulgence for aggression. Market forecasts and financial predictions prevail.

On the job the producer is antagonistic, mean, disagreeable. He talks of top-down solutions, of drilling down to expose weak links, of squeezing, milking, screwing, discarding.

The sun lingers over Uruguay and toasts Eduard Millan. He turns frequently so that his body tans evenly. There is no place in his world for the colourless.

The producer’s skin reminds me of lizards, snakes, creepy things. I wish less of it was on show. I move my chair into the shade, but I am really moving away.

Eduard says he was here in Colonia, watching old Zorro movies, when the idea for the telenovela hit him like a popping cork.

An Argentine Zorro, he thought, I’ll create a super gaucho. He’ll have the intrigue of Don Quixote and the virtues of Robin Hood and he will be my home-grown hero.

As far as I know, the producer has never heard of Antonio Gil, the real hero of gauchos in Argentina. I am almost certain he has never been to the shrine in Mercedes, in the province of Corrientes, has never paid homage to the little man in the red poncho.

If he had, maybe the telenovela might have been a very different story, perhaps with a different name. But it might not have been as popular.

Eduard’s face is flushed. The backrest of the day bed has pushed his waxed hair to one side, as if it were a solid object. He is unaware as he describes that memorable day when, excited by his vision, he walked out onto this very balcony where we are now sitting.

He looked across the haze that hung above the Rio de la Plata and had a light-bulb moment. I’ll call him El Gaucho de la Plata. He’ll be my Silver Gaucho.

So it was that Eduard Millan, the little boy from Connecticut with the snakey skin and the sideways hair, named his lead character after the busy river at his door.